WE ARE B&B FABRICS

Because of our passionate people, streamlined processes and the best European manufacturing, we have everything to make life easier for our customers with the finest off-the-shelf collections. You will always be 'ready for action' as part of our textile family. 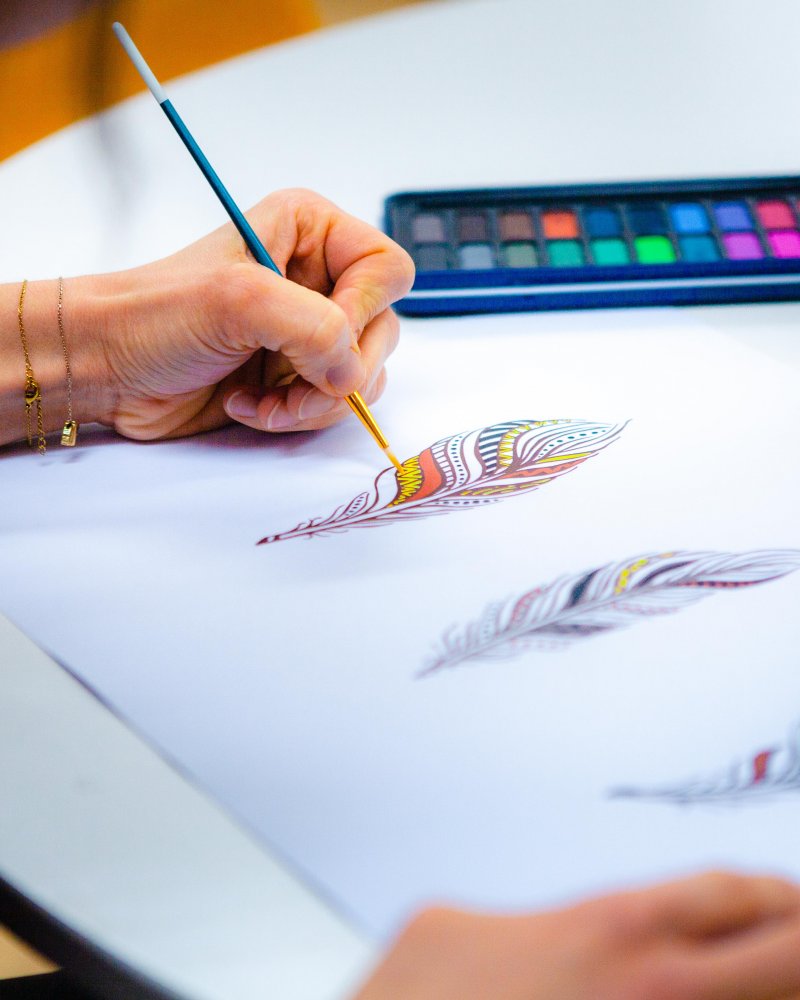 Our fabrics are a gift,
so is working on them together.
We make people happy
and that makes us happy.

We develop ‘own’ collections
in-house with our skilled family
of passionate people.

Thanks to years of knowledge
& experience, we have a specialist
for every challenge.

We delight with the most beautiful collections,
we follow all trends closely
and apply the latest techniques,
because we enjoy that.

That is how we create flawless fabrics
and that is exactly what we are passionate about.
There is nothing we would rather do. 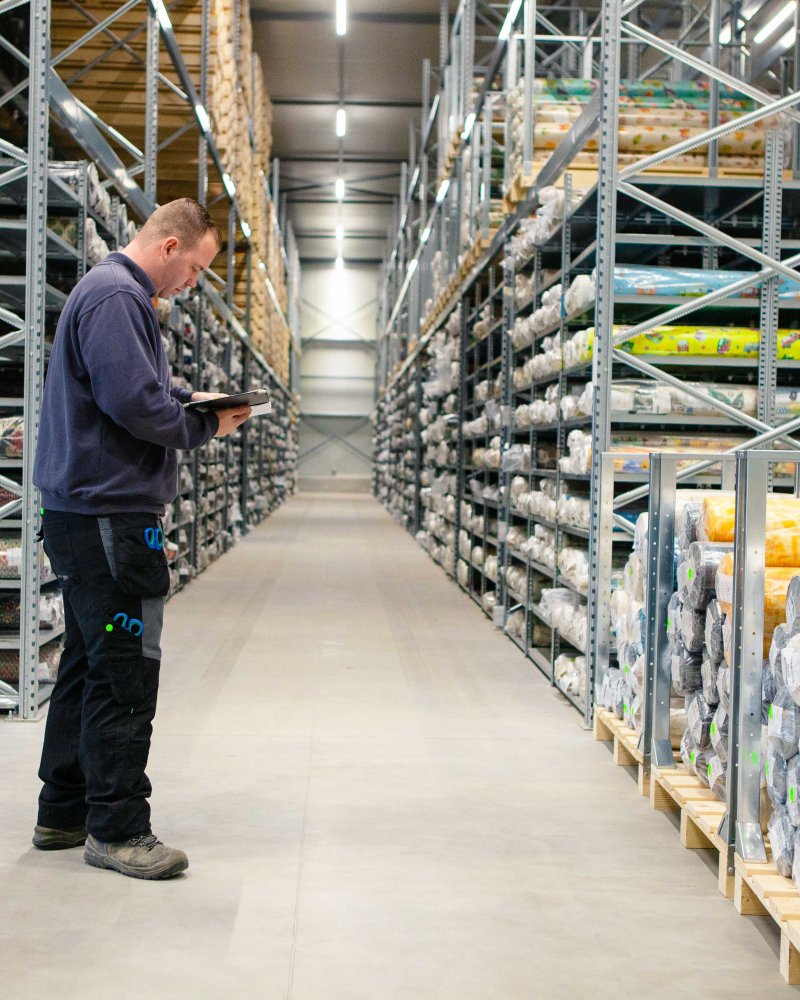 Cut from the same cloth

We have everything you need
and are at your service
to give you and your clients
the attention they deserve.

When there is market demand
for something, we supply it.
Always from stock
and with short lead times.

Thanks to our streamlined process,
we are ready for action
and we always have a suitable solution.

We reinvent ourselves
and are ready for the new era.
That way, we offer the best results
for you and your store.

We are at your service
with the best advice, the most beautiful creations,
as well as personal attention. 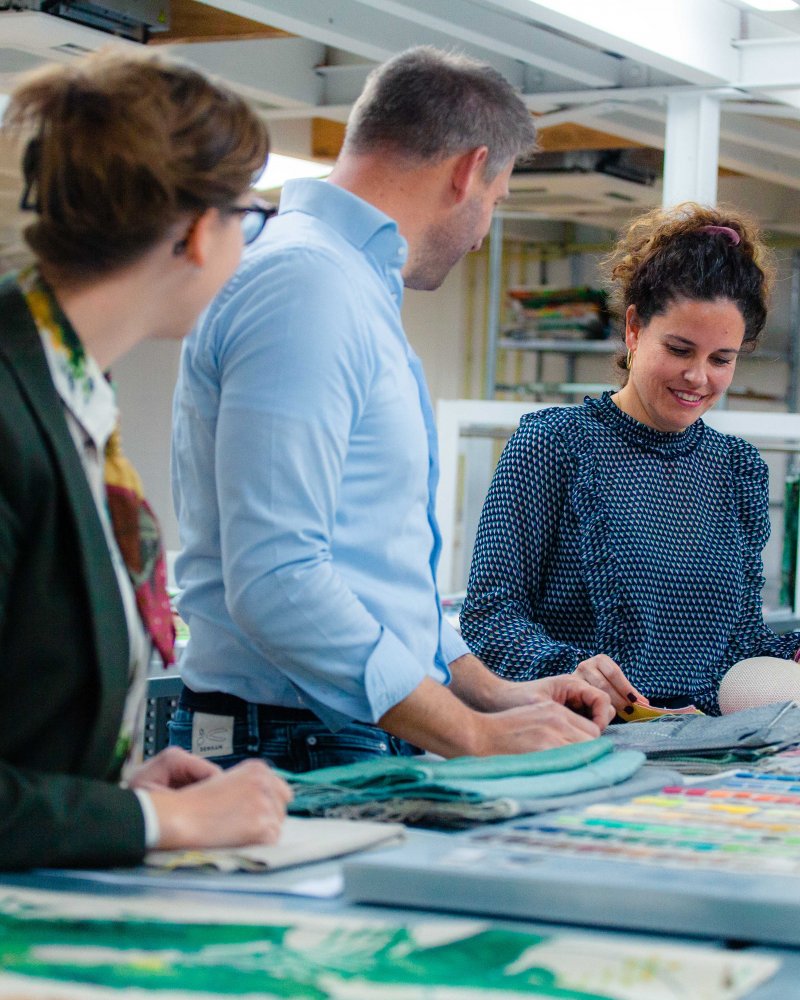 We are one family

We are an authentic textile family
with family members across the whole world,
woven into a single unit.
Big, but with short lines.

We offer the best service
with that personal touch.
Preferably in the client's own home.

Where we celebrate successes together,
learn from one another,
and act quickly like one dynamic team.

Unity is strength,
and we do everything in collaboration.
With our partners all over the world,
and with a sense of familiarity.

Ultimately with a single goal:
to turn clients into ambassadors.
We settle for nothing less.

Relying on one another
for the very best results.

The history of this family business dates back more than 100 years, to the end of the 19th century. Current owner Floris Bertrums’ great-grandfather started selling cotton and wool fabrics door-to-door from a freight bicycle in rural areas. Most of his customers were women, as the mistress of the house used to personally make most of the household’s clothing at the time.

Floris’ grandfather, Jan Betrums, followed in his footsteps and earned a living for his family with great entrepreneurial spirit and a passion for fabrics. Bertrums is a well-known surname in ’s-Hertogenbosch and has strong links to the textile trade. Based on references found in old documents, it seems likely that earlier generations also traded in textiles. The textile industry was present in most areas of the Dutch province of North Brabant from the Middle Ages.

The industry grew in the 18th century as small-scale wholesalers or ‘fabrikeurs’ began to appear. These individuals supplied raw materials and semi-finished products to home workers and then collected the fully or partially completed products again, either to have them finished elsewhere or to sell them at market. The wholesale trade as we know it today adopted this role when the textile industry moved to mass production. 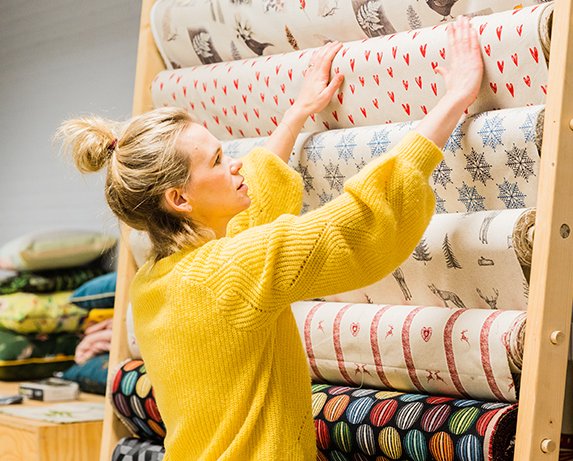 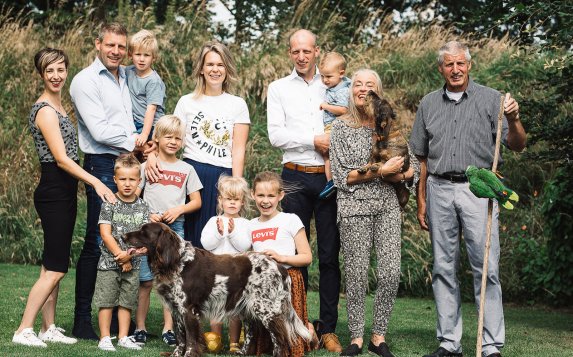 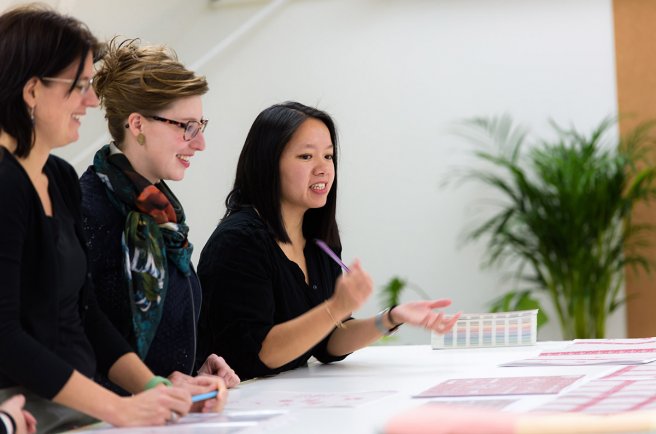 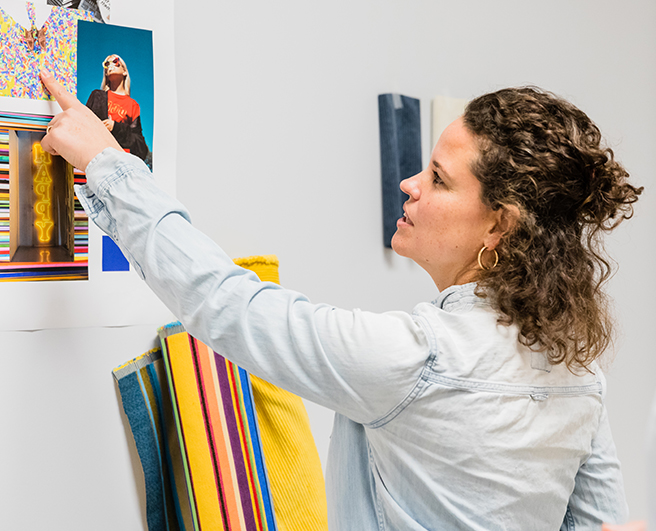 After the war, textiles were mainly traded at the weekly markets in the region. Grandfather Jan Bertrums started up the family's first wholesale activities in the textile trade. He sold fabrics for clothing and household textiles to merchants in the region. When his son Martin (Floris' father) reached the age of 14, he left school to work in his father's company. That meant helping out at the market in the mornings and working in the wholesale business in the afternoons. In addition, he attended a three-year night school course to learn the basics of running a business. Seven out of the total of ten children born into the family went on to work in the textile sector in later years. So Martin learned the trade and developed a passion for textiles from a very young age.

Martin was stationed in Germany during his military service. He was already an entrepreneur through and through, which sometimes led to conflicts with the army's philosophy of ‘order and discipline’. After his military service, Martin Bertrums specialised in buying up unsold and unwanted stocks. By this time, he had outgrown his father's business. His ideas for expanding the business were not always shared by his father. So, without any money of his own, he started his own business called Textielgroothandel Martin Bertrums BV. At the time, the trade was being revolutionised by the introduction of synthetic fabrics such as Trevira 2000. These fabrics were easy to wash and did not require ironing. Martin used to drive his Volkswagen van to German producers to purchase these revolutionary fabrics. He subsequently sold the fabrics to wholesalers and retailers in the Netherlands. His motto was always to trade honestly and pay promptly: “Trade fairly and you automatically gain a good reputation. And don't buy anything if you don't have the money; that's the advice I gave my sons in later years”, says Martin.

STARTING A FAMILY AND THE COMPANY AS IT IS TODAY

Martin and his wife Ineke left the city and settled in Berlicum in North Brabant. The wholesale activity continued from this location and the current company is still based here. Three sons were born into the family. Two of them, Floris and Titus, joined the business when they were older. Without any persuasion and of their own free will, as they will tell you today. After completing secondary school, both of them studied subjects specifically associated with the textile industry at college. As part of the plans for their future, father Martin started a new company called B&B Decoratiestoffen, which is known today as B&B Fabrics. New opportunities opened up for the company when free trade was introduced within the European Community in 1993. This development meant that the company no longer had to focus exclusively on the Benelux and Germany and could expand its activities into other countries.

B&B FABRICS NOW AND IN THE FUTURE

Martin Bertrums left the company several years ago and is now enjoying his well-earned retirement. When asked, he still offers advice though. Floris has held the position of Managing Director of B&B Fabrics for more than 15 years. Floris spent his secondary school years at Zwijsencollege in Veghel. Even though he grew up in a family business with a rich history in textiles, it was by no means self-evident that he would work in his parents' company. However he enrolled for a textile course in Enschede and subsequently gained practical experience working as a trainee at a textile factory in Rochdale, England, which is world famous in the textile sector. He lived in rooms above a pub. Outside work, his life was largely dominated by football. When he came home again, his father had a clear message for Floris. He would be given a year to prove his worth to the company. Martin Bertrums' views were clear: “I won't allow anybody to ruin our company, let alone my own son”. But after just a few months, he knew that everything would work out. Floris quickly grew in his role as an entrepreneur and contributed new ideas which he subsequently implemented successfully. Martin recognised Floris' talents and made him responsible for the company's finances after a while, which effectively put him in control of the entire business. Floris is grateful for the opportunity he has been given. After a period as a self-employed agent, his brother Titus decided to work full-time in sales at B&B Fabrics. As Sales Manager, Titus plays a key role in developing the collection and he is a familiar face for many customers at exhibitions and during visits.

The company, which employs approximately twenty people and sells through twenty agents, has grown into a contemporary textile converter that offers interior fabrics and decorative fabrics. The collections are designed in-house in the company's design studio and then produced by partners in the sector. On balance, B&B Fabrics has benefited from the economic downturn in recent years. Despite the general trend, the company has emerged stronger than ever. B&B Fabrics has outperformed many competitors by keeping stocks high and investing in development and continuity. The pricing policy adopted by B&B Fabrics focuses on the mid-range: it is neither the most expensive, nor the cheapest. The results clearly show that customers feel dependability and therefore continuity to be more important.

Sales have quadrupled during the past 15 years. Even so, Floris is convinced that there is still growth potential for B&B Fabrics. That growth will be achieved through further optimisation of business processes and a modest increase in the workforce. So B&B Fabrics will expand further. There are plans to construct a new building. The company supplies its products to more than 2,500 retailers, producers and service companies in the Netherlands and abroad via various channels, including a contemporary webshop. B&B Fabrics' stand at the trend-setting Heimtex textile trade fair in Frankfurt highlights the company's increasing focus on operating as a highly distinctive textile converter. Distinctive and perfect design, an exclusive collection that is always available from stock, personal attention for customers, honest business practices and excellent value for money are important core values for B&B Fabrics. In addition, more and more companies are realising that B&B Fabrics offers valuable expertise and innovation. In a ‘customer co-creation‘ process, B&B Fabrics enters into a dialogue with the customer in order to jointly design new products and motifs. Fine-tuning the internal organisation is the next step. B&B Fabrics is prepared for the future!